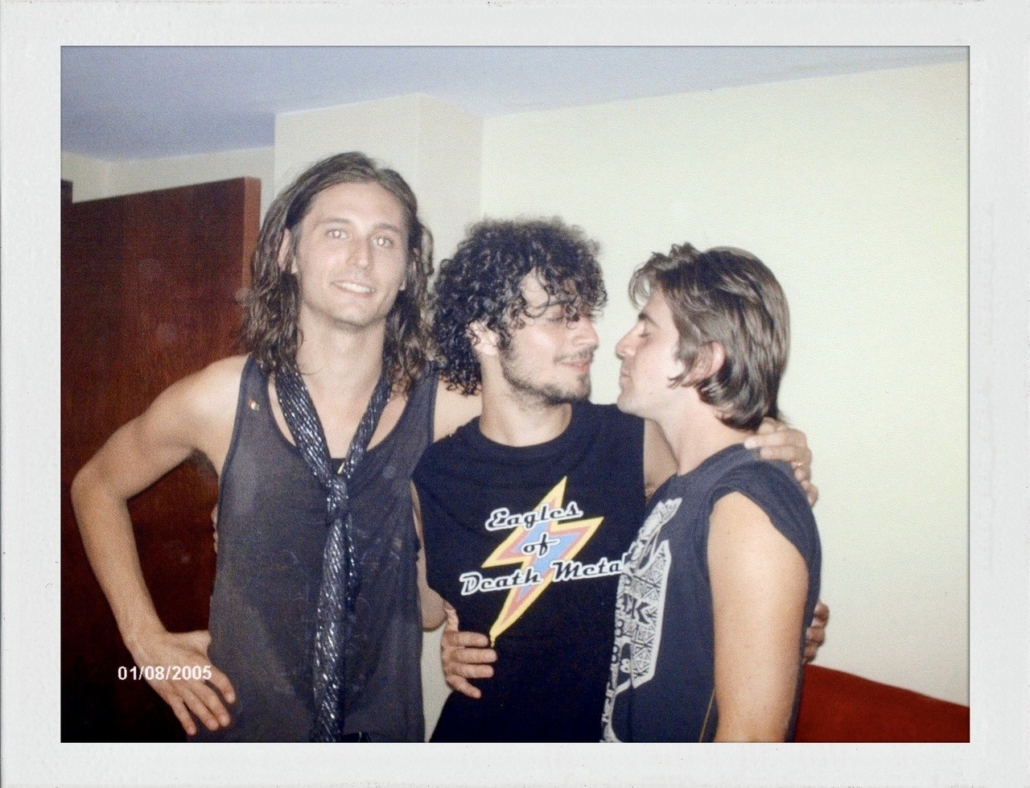 What’s your job? Dad, Husband, Photographer… In that order lol.

What did you study at university? I only did 1 year of college.

How did you start your job? My parents were in the photo industry.

What do you think about influencers? Depends on the influence.

You have shots with many celebrities, Lil Wayne, Lenny Kravitz, Usher, Alicia Keys, just to name a few, which of your works is the one you personally like the most? Outside of The Strokes stuff, I like the Joan Jett shots.  An original bad ass.

How the advent of the smartphones and socials media affected the job of professional photographers? Well now you have social influencers shooting for Vanity Fair, so that says it all.

Has it ever happened to you that a rock star was high during your photo shoot? Little Wayne, but he was cool as hell.

Having always been in such close contact with the world of rock and roll, have you ever thought of approaching music yourself? I’ve played guitar since I was a young teen.  Only got so good though lol.  I’ll jam with Valensi if at his place.

What is the night you spent the most money to have fun? One night in Bangkok.

The best photographer in history? Way to many…

How much do you earn now? Since Covid lol

Nowadays do the Newspapers buy a lot of materials from non-professional photographers? Not sure newspaper do, but online might.

What makes a photographer better than another? Eye and composition.

What’s your shot you are most proud of? I photo I took of The Strokes soundchecking in a empty ballroom.  Only cause it was a great accident getting that photo and it still takes me back everytime I look at it.

The most appreciated one? Prob the band photo from 2001 I took of the guys out in front of their music space on 8th ave.

What people don’t know about your job? It’s a constant struggle.

Where have you been on vacation when you were young? I was fortunate enough that my parents got me out into the world at a very early age. Going to Guadalupe is my earliest vaca memory.

Where are you going on vacation now? Haha… Covid has ruined that for all of us.

What’s the topic you are most expert in? I’m def not an expert on anything lol

What’s the most exciting part of your job? The people.

And the most boring one? The waiting.

Have you ever been in love?  Of course. Currently am.

What was your job before becoming a professional photographer? Always been a photog.

Have you ever had a homosexual experience? Nope.

Where do you live? Brooklyn.

Where are you from? Manhattan, NYC.

Other cities where you’ve been living and how long? Never lived anyway place else besides NYC, but have spent months away from here during my life.

Which Languages do you speak? Just English…Unfortunately. My wife speaks Russian fluently and our 2.5 year old speaks and understands it fully.

Favorite movies? The Panic in Needle Park; Alien and Aliens; Anchorman; Way too many!

The craziest experience you’ve ever had? Dancing on stage with all the performers at Pearl Jams 20th anniversary festival, while PJ played Rocking In the Free World.

What’s the best photographer right now in your opinion? I’m old school, so I think someone like Danny Clinch is still killing it.

The most overrated? All these social media influencer kids that are just handed work cause of the amount of followers they have.

The most underestimated? These days its the ones like me that have been in the industry a long time now.

Your book “The First Ten Years” is entirely dedicated to The Strokes, how did your friendship with them begin? We met back in high school in 1995.  It took off from there. Instant friends that hung every minute.

Who did you meet first? I believe it was Valensi. Our lockers were next to each other. His still my brother to this day.

Do you think success changed them as persons? Not from what I can tell.

If you were an animal which one would you like to be? Prob one of the dogs I’ve had in my life. They had it pretty good.

Have you ever had sex with more than one person? Yep.

Have you ever cheated on your fiancée? Of course not.

Have you ever cheated on a friend? No way.

Do you have some regrets about things you wanted to do but you didn’t do? If so which ones? Some, but not many. Would be different career choices. Only cause older now with a family.

Do you have some dreams that you are trying to realize? If so which ones? Always further myself and who I am and can be as a father, husband, friend and all around decent human.

What time do you usually go to sleep? Sleep?? I got an almost 3 year old, so not sure what sleep is anymore.

What time do you usually wake up? Again….. The kid.

What’s your favorite city in the world? NYC or Paris.

Do you believe in some religions? Ehhhhh…. Not so much.

Do you have many friends? Few close friends, many acquaintances.

What’s the first thing you would do if you win the lottery? Oh Jesus, buy a house.

What’s the thing you like most? My son and wife.

The most precious material thing you own? My gold necklace.

What do you usually drink at the bar? Margarita.

What do you usually have for breakfast? Tend to skip breakfast, but yogurt.

An advice you can give to someone that want to do your job? Don’t count on doing it for money, it’s all about passion.

Best party you’ve been to? My kids 1st Bday was pretty banging.

What drugs have you done? Not many, but enough.

If you had the chance to document an historical event, which one would it be? The Anarchy Tour in 1976.

What’s your best talent? Being a dad.

What are the clothes you can’t stand to see on a man and on a woman? Flip flops.

What do you think about Donald Trump? Human pig waste of a human.

Who are the people that inspired you the most? My parents.

Your ideal holiday? A beach, some shade and no one around.

If you can choose a celebrity for a photo shoot which one would it be ? Dylan.

If you could choose a person you know to read this interview, who would it be? My son Leo.  He’s only 3, but when old enough.